Plant a tree in memory of Jimmie
An environmentally-friendly option 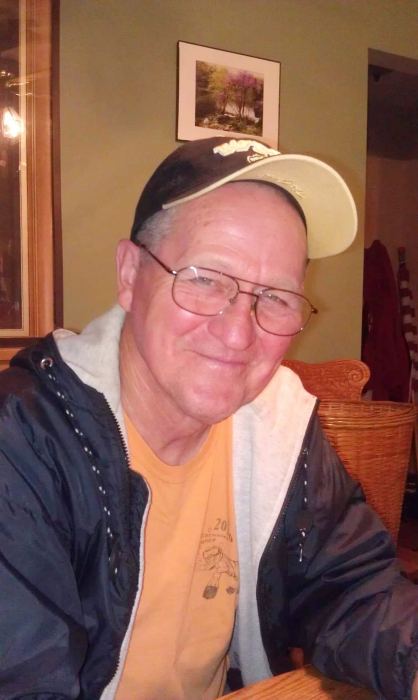 Jimmie D. “Jim” Williams, 79, of Rothbury, formerly of Shelby, passed away on Monday, March 29, 2021 at Harbor Hospice Poppen House in Muskegon, Michigan. Jim was born on October 9, 1941, in Martinsville, Illinois to Eugene and Marceline (Hoyt) Williams, the youngest of 6 siblings. Jim served in the US Navy on the destroyer USS Bordelon, including time on board during the Cuban Missile Crisis in the Bay of Pigs. After his honorable discharge Jim settled in Findlay, Ohio before moving to Michigan.

On May 20, 1989 Jim married Phyllis (Carey) and she survives him, along with their children Reba (Derek) Brown and Mallory (Luke) Baffi. He adored, and relentlessly teased, his grandchildren Giana and Gunner Brown, and recently welcomed the blessings of Trey Brown and Hardin Baffi into the family. Jim was also father to Brent Williams, RaeAnne Booth, Jolie Healy, Lisa Smith and Jenny Williams. He enjoyed times with other grandchildren especially Matt Smith, Jr., Hailey Crowley, and Mikey Booth. Jim is also survived by several other grandchildren and great-grandchildren whom he held closely in his heart and thoughts in prayer.

Jim held a strong work ethic and held many management positions in the manufacturing field including Brundage Corporation in Kalamazoo, Michigan, Air Master Fan in Jackson, Michigan, and retired from Yukon Manufacturing in Litchfield, Michigan in 2003. Jim couldn’t stay retired, working hotel maintenance in Silver Lake for several summers, at Valley City Metal Products, and most recently cutting and delivering wood with his good friend Bruce Brimmer. Unfortunately, Jim contracted COVID-19 in October of 2020 and the virus rapidly advanced his Alzheimer’s Disease and shortened his life significantly. He was a devoted Christian who held a deep faith in Jesus Christ, sharing his favorite belief that “God is good all the time, and all the time God is good.” Jim was also known as “Coach” to years of softball players in Kalamazoo and Shelby through coaching on summer recreation leagues and volunteering with the Shelby High School softball program. Jim also volunteered at the annual Heather Copenhaver Softball Tournaments, and at several post-prom events at Shelby High School.

Per his wishes, Jim will be cremated, and a celebration of his life will take place at a later time when it is considered safe to gather in large groups. Jim’s family would like to thank the excellent staff at Harbor Hospice Poppen House for their compassionate care of Jim in his final days. In lieu of flowers, the family would appreciate contributions to the Heather Copenhaver Scholarship Fund at the Community Foundation for Oceana County, PO Box 902, Pentwater, MI 49449 or gifts can be made online at www.oceanafoundation.org to the Shelby Public Schools Foundation Fund, which includes the Copenhaver Scholarship, or to the Alzheimer’s Association, 564 S Main St. Suite 200, Ann Arbor, MI 48108.

Plant a tree in memory of Jimmie by clicking here.
To send flowers to Jimmie's family, please visit our floral store.

Plant a tree in memory of Jimmie
An environmentally-friendly option

Plant a tree in memory of Jimmie

1 tree planted in memory of Jimmie

Our family was so blessed to have known Jim through all the summers of softball that Reba & Julie played together.  May God's peace be with you all.  ((((HUGS)))) from afar.  Love the Nietering Family

The Schuchardt's - Carl and Brenda

Our condolences and prayers! May God's peace be with you all!

Daddy, you have always been my hero and I was always daddy's little girl but somehow our relationship changed over the years and we didn't spend nearly enough time together. I will always cherish your memory and the times that we did get to spend together. You were a man with a big heart and oh how wise you were. You served our country in the Navy and I am so proud to be your oldest daughter. I love you daddy and will miss you forever. Please hug my son and husband for me. Until we meet again.

To the Family of Mr. Jimmie D. Williams,

The membership of American Legion Post #234 in Hart, Michigan, would like to share our deepest sympathy with your family on your loss. Mr. Williams’ service to our country makes him a hero as far as we’re concerned and certainly you’re very proud of him, too. We want you to know that his brothers and sisters in arms now share in your grief.

Plant a tree in memory of Jimmie